Studying and living the Bhagavatam 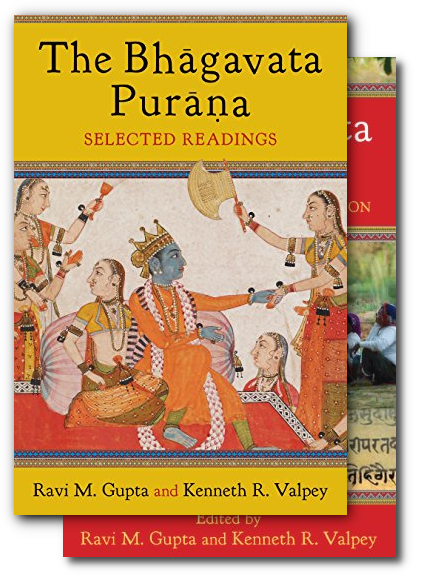 The Bhagavata Purana is one of the most highly regarded and variegated of Hindu sacred texts. Although essentially a work of the puranic genre, the Bhagavata stands out among the Puranas, or sacred histories, in several important ways. Among these are its coherent narrative structure, its high poetic quality, its philosophical sophistication, and its extensive development of bhakti theology. As such, this work of over 14,000 Sanskrit verses ranks, along with the Ramayana and Mahabharata, as central to the contemporary Hindu corpus of sacred texts in the Sanskrit language.

Thus over the last forty years I have been studying and living the Bhagavata Purana and still take time each day to give it proper attention.

The Bhagavata Purana is considered the crown jewel of the Hindu sacred ancient Sanskrit literature known as the Puranas. The Bhagavata Purana is a bhakti (devotional) scripture focused on the life and activities of Lord Krishna. As a major source of the living bhakti tradition in India, it is essential to understand this text to understand India’s culture of bhakti, art, literature and festivals. This 60-minute feature documentary focuses on the January 2017 International Bhagavata Purana Conference held in Chennai, India, where prominent Bhagavata scholars assembled to discuss this Sanskrit classic. Here we explore the ancient and contemporary life of this multi-faceted work with the documentary’s host, Dr. Kenneth Valpey, co-director (with Prof. Ravi M. Gupta) of the Bhagavata Purana Research Project of the Oxford Centre for Hindu Studies.

[…] The “culture of the Bhagavatam” is the hero of this story. We get bits and pieces of it , particularly dance, art, and music, throughout the movie. Philosophy mostly sits in the background while sentiments of bhakti take center stage. The approach of the female director is studied, deliberate, methodical, and revelatory – a gentle, feminine touch that is both confident and reassuring… // See the whole review =>

As a work in the literary language of the brahmins, the Bhagavata has enjoyed considerable commentarial attention, yet it has also permeated popular Hinduism, both in India and diaspora communities, through manifold interpretations in temple liturgy and architecture, ritual recitations, dance, drama, and more recently, film. The text serves a foundation for the religious practice of several major north Indian devotional traditions, as well as schools of dance and drama. Indeed, the contemporary popularity of the text in India is attested by the fact that Gita Press (a north Indian publisher of popular, inexpensive editions of Hindu religious texts) has printed over 400,000 copies of the Bhagavata to date. All major vernacular languages of India have renditions of the Bhagavata, which often become regional classics in their own right. In recent years, this Purana has captured the interest of a broad western readership and a growing Indian diaspora.

A sacred text as significant as the Bhagavata Purana calls for greater attention in the academic world. With the recent resurgence of interest in the Puranic genre of literature, and the surprisingly few academic resources available for the study of the Bhagavata, we feel that the time is right for a broadly representative study of the text (e.g. text‐critical questions) and its contexts (e.g. reception history), together with its intellectual scope in relation to both Eastern and Western spheres of discourse. Furthermore, the commentarial tradition, derivative texts, and performative expressions represent a body of religious and cultural knowledge that is more vast than the Bhagavata itself, but which is as yet hardly tapped by students of India.

There is an initial need to assess the current state of Bhagavata studies, and consolidate past scholarship on the text. The Bhagavata Purana has been an important part of the Western encounter with Hinduism since at least the mid‐nineteenth century. The earliest translation into a European language was done by the French orientalist Eugene Burnouf, who published the original Sanskrit text with French translation in three folio volumes from 1840 through 1847. Renewed recognition of the Bhagavata’s place among world literature and its continued importance as a sacred text has led to several recent publications by academic publishers aimed at reaching a broader English readership. Many of these books have naturally focused the Bhagavata’s tenth book, which narrates the life of Krishna. Yet some of the most influential and retold narratives of the Bhagavata, such as the churning of the ocean, the great flood, and the appearance of the man‐lion Narasimha, come from earlier or later sections of the Bhagavata. It is thus our intention to correct this exclusive focus on the tenth book by making this research project broadly representative of the Bhagavata as a whole.

A network of scholars engaged in Bhagavata studies has been developing, and an initial conference was held in early January 2017 in Chennai, entitled “The Bhāgavata Purāṇa: History, Philosophy, and Culture.”

Phase One is largely completed, with the following outputs:

Both books have been published by Columbia University Press, for use by scholars in research and teaching and for students of South Asian and related studies.

Phase Two has commenced, with the following initial undertakings:

Institutions with which we are currently collaborating on this project include:

Outputs during later phases of the project may include: