A few days ago, I accepted an invitation by my friend Christopher Fici (who just a few
weeks ago successfully passed his doctoral dissertation defense at Union Theological
Seminary—congratulations to him!) to be a guest co-editor (or co-guest-editor?) for a
special issu of the Journal of Dharma Studies, on the subject of Dharma and Ecology. We two are also co-authoring one article for the same issue. Our working title for this article is “The Eco-theological Rasa of Bhakti: An Anticipatory Dialogue.” We’re structuring it like a dialogue, with ourselves as the interlocutors. One point we make is that dharma without bhakti is inadequate to effectively address the current human-generated environmental catastrophic direction of the world. Here is a short excerpt of what I added yesterday to the article (a work in progress; earlier in the article, Chris distinguishes between the “chaff” and the “kernel” of dharma, and I suggest that the “chaff” is the normative or prescriptive aspect of dharma, and the “kernel” is the descriptive aspect of dharma, that which identifies living beings as essentially non-temporal, spiritual beings):

Normative dharma, being concerned with what ought to be done, highlights the gap between what is and whatever is considered ought to be. Hence, this aspect of dharma is focused on difference. For this reason, it cannot, by itself, enable human beings to escape from the tendency to perceive the natural world in terms of difference, which translates into competitive terms. In this sense, normative dharma yields to the biotic reality acknowledged in some post-Vedic texts with an arguably “ecological” observation, namely, “One living being is food for another.” Therefore normative dharma—which is meant specifically for human beings—tends to uphold anthropocentrism—indeed unavoidably—even as it aims to guide us humans toward self-restraint as the starting point for realizing justice and sustainability on all levels. By the same token, normative dharma tends to affirm anthropocentrism even as it guides us—hopefully—toward the truth of our core non-material, brahman-centric (divine) being that is the object of descriptive dharma, dharma’s “kernel”, as you say. Within the limited scope of normative dharma, the hierarchical worldview will be in play and, indeed, has its limitedly rightful place. Show us a righteous, dharma-principled king with real power to institute appropriate state policies, and we could expect to see values such as ecological balance and sustainability being at least valued and pursued if not thoroughly realized and secured. Such a king’s efficacy, with the cooperation of all sections of human society, would turn largely on his affirming some degree of hierarchical social structure.

However, bringing to bear the bhakti paradigm, because of their connection (drawing on a core meaning of the term yoga as “connection”) with divinity, humans become enabled to go beyond the competitive aspect of the natural world to recognize, become situated in, and act on the basis of the cooperative aspect of the natural world’s ecological reality. Crucially, the bhakti paradigm opens us to the cooperative principle in nature. It is from the standpoint of bhakti that truly equal vision is experienced, without which effective action in pursuit of sustainable human thriving must remain burdened by shortsightedness.

This thought concerning competitive versus cooperative aspects of nature in relation to dharma and bhakti came to me during a walk in the adjacent forest (I’m now at my home in Poland, after ten weeks of lockdown in India and two weeks of quarantine in Germany). One area of the forest that I’ve been visiting each day is a large clearing, where recent lumbering has left a cemetery of silent tree stumps. While surveying this field of destruction, I ask myself, “Had there been a bhakti-infused harvesting of these trees, could they have gone for better, devotional use, like making paper for printing devotional literature rather than for printing sensationalist media? Could less trees have been cut down, or maybe no trees? In reply, the surrounding, still-standing trees only shiver their leaves with the soft breeze. But I like to think that just to ask this question is the beginning of making a positive difference for the environment, inspired by the devotional spirit of bhakti that sees divine presence in all living things and thereby invokes reverence for all life. 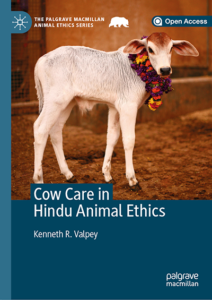 Find out more about the project
Get a free pdf copy now
Meet the Gir Family Virtual Attendance in the American Academy of Religion Annual Meeting—December...
Scroll to top